“The Hallmarks of Cancer”[1]is a seminal[2][3]peer-reviewed article published in the journal Cellin January 2000 by the cancer researchers Douglas Hanahan and Robert Weinberg.

The authors believe that the complexity of cancer can be reduced to a small number of underlying principles.The paper argues that all cancers share six common traits (“hallmarks”) that govern the transformation of normal cells to cancer (malignant or tumor) cells.

The traits (“hallmarks”) that the authors highlight in the paper are (1) Cancer cells stimulate their own growth (self-sufficiency in growth signals); (2) They resist inhibitory signals that might otherwise stop their growth (insensitivity to anti-growth signals); (3) They resist their programmed cell death (evading apoptosis); (4) They can multiply indefinitely (limitless replicative potential) (5) They stimulate the growth of blood vessels to supply nutrients to tumors (sustained angiogenesis); (6) They invade local tissue and spread to distant sites (tissue invasion and metastasis).

In an update published in 2011 (“Hallmarks of cancer: the next generation”), Weinberg and Hanahan proposed two new hallmarks: (1) abnormal metabolic pathways, (2) evading the immune system and two enabling characteristics: (1) genome instability, and (2) inflammation.[5]

Normal cells grow and divide, but have many controls on that growth. They only grow when stimulated by growth factors. If they are damaged, a molecular brake stops them from dividing until they are repaired. If they can’t be repaired, they commit programmed cell death (apoptosis). They can only divide a limited number of times. They are part of a tissue structure, and remain where they belong. They need a blood supply to grow.

All these mechanisms must be overcome in order for a cell to develop into a cancer. Each mechanism is controlled by several proteins. A critical protein must malfunction in each of those mechanisms. These proteins become non-functional or malfunctioning when the DNA sequence of their genes is damaged through acquired or somatic mutations (mutations that are not inherited but occur after conception). This occurs in a series of steps, which Hanahan and Weinberg refer to as hallmarks.

Cancer cells do not need stimulation from external signals (in the form of growth factors) to multiply.

Typically, cells of the body require hormones and other molecules that act as signals for them to grow and divide. Cancer cells, however, have the ability to grow without these external signals. There are multiple ways in which cancer cells can do this: by producing these signals themselves, known as autocrine signalling; by permanently activating the signalling pathways that respond to these signals; or by destroying ‘off switches’ that prevents excessive growth from these signals (negative feedback). In addition, cell division in normal, non-cancerous cells is tightly controlled. In cancer cells, these processes are deregulated because the proteins that control them are altered, leading to increased growth and cell division within the tumor.[7][8]

Cancer cells are generally resistant to growth-preventing signals from their neighbours. 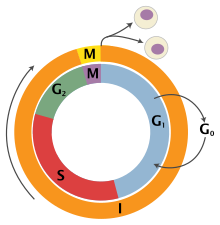 The cell cycle clock. Cells do not divide in G0and are quiescent. After receiving growth factor signals, they prepare for division by entering G1, where everything within the cell except DNA is doubled. This doubling includes the size of the cell. The next phase of the cell cycle is S (synthesis) phase. It is the cell cycle phase where the chromosomes (DNA) are duplicated in preparation for cellular division. The transition from G1to S is a checkpoint. If the cell has damaged DNA or is expressing oncogenes or other inappropriate proteins, specialized checkpoint proteins, tumor suppressors such as p53 or pRB, will interrupt the transition to S phase until the damage is repaired. If the damage cannot be repaired, the cell will initiate apoptosis, often referred to as cellular suicide, which is programmed cell death. If the tumor suppressor genes incur loss-of-function mutations or are knocked out, the damaged cell can continue to divide unchecked — one of the hallmarks of cancer.

To tightly control cell division, cells have processes within them that prevent cell growth and division. These processes are orchestrated by proteins known as tumor suppressor genes. These genes take information from the cell to ensure that it is ready to divide, and will halt division if not (when the DNA is damaged, for example). In cancer, these tumour suppressor proteins are altered so that they don’t effectively prevent cell division, even when the cell has severe abnormalities. Another way cells prevent over-division is that normal cells will also stop dividing when the cells fill up the space they are in and touch other cells; known as contact inhibition. Cancer cells do not have contact inhibition, and so will continue to grow and divide, regardless of their surroundings.[7][9]

Apoptosisis a form of programmed cell death (cell suicide), the mechanism by which cells are programmed to die in the event they become damaged. Cancer cells are characteristically able to bypass this mechanism.

Cells have the ability to ‘self-destruct'; a process known as apoptosis. (*) This is required for organisms to grow and develop properly, for maintaining tissues of the body, and is also initiated when a cell is damaged or infected. Cancer cells, however, lose this ability; even though cells may become grossly abnormal, they do not apoptose. The cancer cells may do this by altering the mechanisms that detect the damage or abnormalities. This means that proper signalling cannot occur, thus apoptosis cannot activate. They may also have defects in the downstream signalling itself, or the proteins involved in apoptosis, each of which will also prevent proper apoptosis.[7][10]

Non-cancer cells die after a certain number of divisions. Cancer cells escape this limit and are apparently capable of indefinite growth and division (immortality). But those immortal cells have damaged chromosomes, which can become cancerous

Cells of the body don’t normally have the ability to divide indefinitely. They have a limited number of divisions before the cells become unable to divide (senescence), or die (crisis). The cause of these barriers is primarily due to the DNA at the end of chromosomes, known as telomeres. Telomeric DNA shortens with every cell division, until it becomes so short it activates senescence, so the cell stops dividing. Cancer cells bypass this barrier by manipulating enzymes that increase the length of telomeres. Thus, they can divide indefinitely, without initiating senescence.[7][11)

Mammalian cells have an intrinsic program, the Hayflick limit, that limits their multiplication to about 60–70 doublings, at which point they reach a stage of senescence.

This limit can be overcome by disabling their pRB and p53 tumor suppressor proteins, which allows them to continue doubling until they reach a stage called crisis, with apoptosis, karyotypic disarray, and the occasional (10−7) emergence of an immortalized cell that can double without limit. Most tumor cells are immortalized.

The counting device for cell doublings is the telomere, which decreases in size (loses nucleotides at the ends of chromosomes) during each cell cycle. About 85% of cancers upregulate telomerase to extend their telomeres and the remaining 15% use a method called the Alternative Lengthening of Telomeres.[12]

Angiogenesisis the process by which new blood vessels are formed. Cancer cells appear to be able to kickstart this process, ensuring that such cells receive a continual supply of oxygen and other nutrients.

One of the most well known properties of cancer cells is their ability to invade neighboring tissues. It is what dictates whether the tumor is benign or malignant, and is the reason for their dissemination around the body. The cancer cells have to undergo a multitude of changes in order for them to acquire the ability to metastasize. It is a multistep process that starts with local invasion of the cells into the surrounding tissues. They then have to invade blood vessels, survive in the harsh environment of the circulatory system, exit this system and then start dividing in the new tissue.[7][14]

In his 2010 NCRI conference talk, Hanahan proposed two new emerging hallmarks and two emerging characteristics. These were later codified in an updated review article entitled “Hallmarks of cancer: the next generation.”[5]

Most cancer cells use abnormal metabolic pathways to generate energy, a fact appreciated since the early twentieth century with the postulation of the Warburg hypothesis,[15]but only now gaining renewed research interest.[16]Cancer cells exhibiting the Warburg effect upregulate glycolysis and lactic acid fermentation in the cytosol and prevent mitochondria from completing normal aerobic respiration (oxidation of pyruvate, the citric acid cycle, and the electron transport chain). Instead of completely oxidizing glucose to produce as much ATP as possible, cancer cells would rather convert pyruvate into the building blocks for more cells. In fact, the low ATP:ADP ratio caused by this effect likely contributes to the deactivation of mitochondria. Mitochondrial membrane potential is hyperpolarized to prevent voltage-sensitive permeability transition pores (PTP) from triggering of apoptosis.[17][18]

The ketogenic diet is being investigated as an adjuvant therapy for some cancers,[19][20]including glioma,[21]because of cancer’s inefficiency in metabolizing ketone bodies. But this avenue of research is controversial as different experimentations have shown that cancer can adapt and thrive with ketones as well. (See the Ketogenic diet flaws file

Despite cancer cells causing increased inflammation and angiogenesis, they also appear to be able to avoid interaction with the body’s via a loss of interleukin-33 immune system.

Cancer cells generally have severe chromosomal abnormalities which worsen as the disease progresses. HeLa cells, for example, are extremely prolific and have tetraploidy 12, trisomy 6, 8, and 17, and a modal chromosome number of 82 (rather than the normal diploid number of 46).[22]Small genetic mutations are most likely what begin tumorigenesis, but once cells begin the breakage-fusion-bridge (BFB) cycle, they are able to mutate at much faster rates. (See genome instability)

Recent discoveries have highlighted the role of local chronic inflammation in inducing many types of cancer. Inflammation leads to angiogenesis and more of an immune response. The degradation of extracellular matrix necessary to form new blood vessels increases the odds of metastasis. (See inflammation in cancer)

An article in Nature Reviews Cancerin 2010 pointed out that five of the ‘hallmarks’ were also characteristic of benign tumours.[23]The only hallmark of malignant disease was its ability to invade and metastasize.[23]

An article in the Journal of Biosciencesin 2013 argued that original data for most of these hallmarks is lacking.[24]It argued that cancer is a tissue-level disease and these cellular-level hallmarks are misleading.

The ACR Institute is working on the third generation of Hallmarks, which will modify and simplify those that already exist.

Hallmarks of cancer: the next generation.

The hallmarks of cancer comprise six biological capabilities acquired during the multistep development of human tumors. The hallmarks constitute an organizing principle for rationalizing the complexities of neoplastic disease. They include sustaining proliferative signaling, evading growth suppressors, resisting cell death, enabling replicative immortality, inducing angiogenesis, and activating invasion and metastasis. Underlying these hallmarks are genome instability, which generates the genetic diversity that expedites their acquisition, and inflammation, which fosters multiple hallmark functions. Conceptual progress in the last decade has added two emerging hallmarks of potential generality to this list-reprogramming of energy metabolism and evading immune destruction. In addition to cancer cells, tumors exhibit another dimension of complexity: they contain a repertoire of recruited, ostensibly normal cells that contribute to the acquisition of hallmark traits by creating the “tumor microenvironment.” Recognition of the widespread applicability of these concepts will increasingly affect the development of new means to treat human cancer.